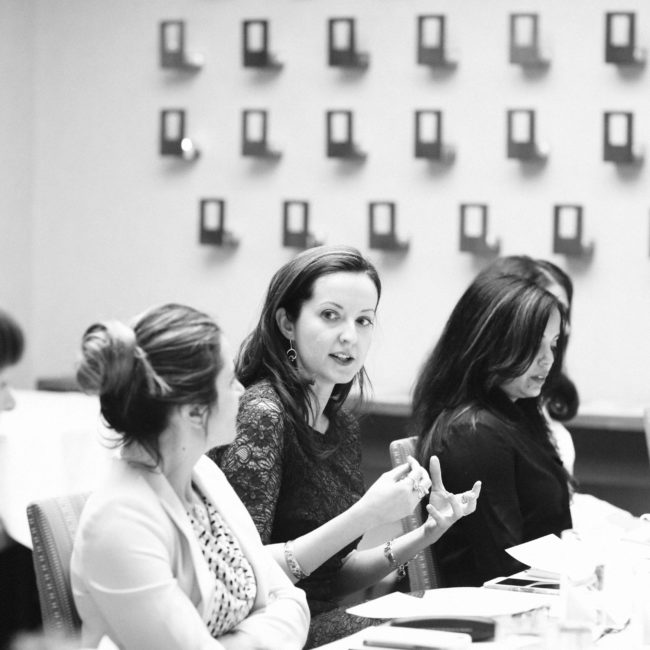 Originally published in See Beyond Magazine

Sitting in a beautiful room, reminiscent of a castle chamber, gentle sunlight from the window reflects the sleek shapes of bottles and glasses on the table in front of me. A silver velvet tapestry on the chairs plays nicely against the delicate wall frescos. The scene, like a Renaissance painting, is truly splendid. And although the room itself is something to talk about, it’s the presence of the elegant, sophisticated women who have come from France, Italy, Romania, Norway and the US that truly makes me want to pinch myself. Is this a dream? Is it my imagination? I can’t help but wonder, did the salons of 18th and 19th century Europe look similar? Are we those same people, who once sat together at the table centuries ago, now returned to carry on the conversation in another lifetime, reuniting at the Krakow Salon of August 2017?

It was spring of this same year, after a vastly polarizing US election, I found the discourse in the media and in our everyday lives to be highly divisive. Suddenly, I felt the urge to disconnect from the noisy media and pop culture and connect with humans on a deeper level.

I craved in-person intellectual conversations that went beyond the noise, drama and superficial aspects of life so prominently promoted in today’s media.

I clearly imagined sitting with friends around a candlelit table, having a rich conversation, exchanging ideas, and inspiring each other. That’s what I was longing for, especially at those times when I felt uninspired by what was happening in the world.

When I first came up with the idea of a salon, I did not see a direct link between my own more subconscious need for human connection and simply another opportunity for my business.

As I strolled down the cobblestone streets of Old Town Krakow, lined with ornate Renaissance buildings, I thought about the great philosophers, artists, and luminaries, who once walked those same streets. I pondered how our physical environment and its history can inspire our way of thinking and creativity.

Krakow, the cultural capital of Poland, like other European cities, was a center for the salons, the gathering places of the most prominent intellectuals and progressive leaders of the time. They were held at the lavish homes and palaces of aristocrats. What differentiated the Polish salons was that, over time, they became more democratized and not just exclusive to the upper class. In the 19th century, the salon became a political and social institution, evolving into a form simultaneously more modest and more inclusive, held at less lavish homes, cafes, and libraries.

Those salons had a profound impact on both Polish and Jewish literature and culture, especially at the time when Poland was partitioned and erased from the maps and when the Polish independent state was still a remote dream. The salon represented Polish and Jewish attempts to build a modern, open and democratic public sphere, despite the surrounding hostile political reality.

Walking the streets of Krakow, I recognized the social impact of those intellectual salons—such small, yet powerful, gatherings.

We walked down Florianska Street and stopped by Michalik’s Burrow, a café where cabaret and literary elite, key leaders of the Young Poland movement (a modernist period in Polish visual arts, literature and music), held meetings at the turn of the 20th century. This is where Stanislaw Wyspianski, the author of the literary masterpiece, Wesele (Wedding) met with fellow writers and artists to exchange ideas.

And so, our salon brought us back to Krakow, located in the region of Poland where both I and my salon co-organizer, Monika Broz, grew up. The salon gave us the opportunity to come back and share the beauty and inspiring heritage of this city with fellow women entrepreneurs, who traveled here from other countries and continents.

We all came together in this magical room to share ideas and support each other’s endeavors.

We could sense the vibrant energy of the place and were deeply touched by its rich history, art, architecture, music and cuisine. It felt like a continuation of the inspired thought that began in this place centuries ago. I look back at this salon as just the beginning, a start of a bigger dialogue that will continue to build over the years with fellow entrepreneurs and leaders from around the world.

Just like the powerful impact of 19th century salons, I believe today’s salons are vitally important in advancing progressive thoughts and ideas. At times when modern media and technologies create division and chaos, we can leverage one method that has never failed: deep human connection and inspired, progressive, multi-dimensional dialogue.